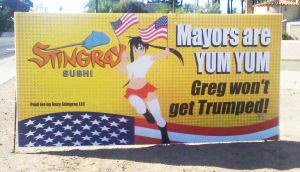 Stingray Sushi is trying to drum up business with a new political ad campaign – for both presidential candidates Mitt Romney and President Barack Obama.

The signs have popped up all over Phoenix and show the restaurant chain’s Japanese anime icon, Suzy Stingray, and ad slogans like “Mitt bit my sushi.” Other Suzy Stingray signs play on the presidential candidates’ own campaigns, such as “Obama cares about our sushi.”

It will come as no surprise to local political junkies that one of the lead developers of these ads is Jason Rose of Rose, Moser and Allyn Public Relations in Scottsdale who works with Stingray Sushi owner Greg Donnally.

Those records also show Stingray Sushi lacks authorization from candidates Obama and Romney for the PAC.

One Arizona Republic reader wondered in an e-mail to an editor: “How is it that the PAC is permitted to convey a clear benefit on a supposedly unrelated commercial enterprise?”

Phoenix spokeswoman Stephanie Ribodahl Romero said the signs are legal because they are election signs from a political-action committee, and Stingray has obviously “found a loophole” in city and state regulations on political signs.

By Nov. 6 this year, the restaurant has to remove them.

A Stingray Sushi marketer Brian Ruede said the ad campaign “is a funny way for us to represent both candidates. We have signs for both political candidates. We’re not picking a side.”

He said the restaurant had similar ads during Phoenixs mayoral election in the fall.

NEXT ARTICLE →
RLG Partner, Court Rich, tweeting live from the GPEC – China Solar Tariff event, this was a big deal and congrats to GPEC for taking a strong position!