A rule approved by the Arizona Department of Water Resources in 2009 could cause most Pinal County farmers to lose their groundwater rights.

“This is the biggest secret around,” said Dick Powell, a Casa Grande City Council member and local business owner. “People don’t know this is happening.”

Powell is one of several in the agricultural industry hoping to spread the word about ADWR’s plan to gradually reduce grandfathered agricultural groundwater rights until they are permanently extinguished in 2055.

A meeting to discuss how the state water credit extinguishment rule will affect agriculture will be held at 6p.m. June19 at Casa Grande City Hall.

“By 2054, farmland will be worth the same as dry desert land,” Powell said. “This is a serious issue. The ruling will take the value out of the land. And the rule is final unless we get it changed.” 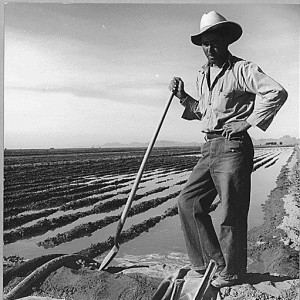 Many in the community don’t know about the plan or don’t believe it will be enacted.

“They think it sounds too crazy to be true,” Powell said.

A meeting scheduled for next month aims to reach those farmers who don’t know about the ruling and to rally the agricultural community.

With enough pressure, he believes the Pinal Active Management Area’s

Groundwater Users Advisory Committee, which serves as a liaison between ADWR and community groundwater users, will take a more proactive stance against the plan. With the committee’s support, ADWR could halt the extinguishment plan.

“They can stop this ruling,” Powell said.

Under the ADWR ruling, grandfathered agricultural groundwater credits will be gradually lowered each year until they reach zero in 2054.

Credits begin to decline in 2014, when allocation factors drop to 94 percent of the original amount.

Once the rights are extinguished, the land can no longer be used for agriculture, according to the ruling.

With reduced water credits, the value of farmland drops significantly.

Powell said some farmers will not wait for the credits to reach zero before abandoning farming.

“There are farmers who might decide to just cash out now and move someplace else,” he said.

That would devastate the local economy, according to Powell.

“Agriculture and the industries that support it — from the fertilizer plants to the tractor companies — it’s 40 percent of the economy,” he said. “If agriculture goes, we’re left with nothing.”

As farms disappear, developers could pick up the land at lower prices and either homes or bare desert would likely replace former cotton fields.

When a grandfathered groundwater right is extinguished, ADWR will issue water credits to developers, according to the rule.

Powell believes much of the reallocated agricultural water would be diverted to the Supersti- tion Vistas project, a large development planned near Apache Junction that anticipates a population of 1 million people.

Powell said the development so far does not have adequate water rights.

With farmland devalued, some developers could also purchase, at a discount, agricultural acres for future subdivisions through- out Pinal County, but Powell believes there are problems with that outlook as well.

“Arizona is already challenged for water,” he said. “The consensus is there is no new water. Desalinization is expensive and the Colorado River is overused and endangered. There could come a time when water short- ages mean no more front yards. No more swimming pools. Will people from the East still want to come here then?”

Without agricultural fields to serve as a buffer between bare desert and housing developments, Powell also thinks the area will not be as attractive to potential newcomers to the area.

“The farms reduce the dust and they’re pretty,” he said.

If the new rules take effect, some farmers could potentially rezone their land from agriculture to municipal and industrial to retain their full credits for resale. Some dairies are already zoned as industrial, Powell said, but land growing hay, cotton, corn and other crops is not.

But he believes the water agency will change the ruling with enough pressure.

NEXT ARTICLE →
Things the farm bill could do for clean energy