Target of subpoena has ties to sheriff’s office 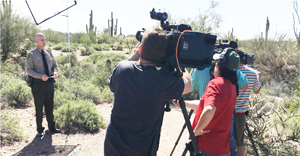 The Pinal County Sheriff’s Office has denied that it is the target of an FBI subpoena served Wednesday, but the department has ties to the organization that is the subject of the federal investigation.

The Arizona Public Safety Foundation was first incorporated as the Pinal County Sheriff’s Office Justice Foundation in 2007 and later dubbed simply the Pinal County Justice Foundation before making its most recent transformation in 2010. The nonprofit organization was housed within PCSO for a time, and both past and present board members have been employed by the department, including current member and deputy Erik Larsen.