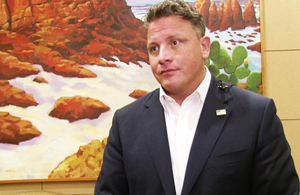 Independent voters, who get shut out of primary elections and are ignored by Republicans and Democrats, proved in the 2016 election that squandering their voices is politically dangerous, according to some political observers.

Public officials, pollsters and university professors said in panels earlier this week that too many miscalculated the power of the independent voter – those unaffiliated with either of the two major parties – in predicting Donald Trump would become the nation’s next president.

Daniel Ortega of the Cesar Chavez Foundation, speaking at a post-election discussion organized by the Morrison Institute for Public Policy, said Democratic and Republican leaders shut out independent voters.

“‘Nobody calls me. Nobody comes to my door. Nobody sends me materials,’” Ortega said he’s often told. “A larger number of voters are left out there with no communication.”

Since independents in Arizona aren’t allowed to vote in closed primaries, candidates of major parties miss out on hearing from a large voter demographic, he said at Wednesday’s panel.

“They get nothing because they can’t vote in the primaries,” Ortega said, adding it rigs the system against unaffiliated voters.

The idea that the voting process is “rigged” could be true, according to several panelists at the session. Arizona Secretary of State Michele Reagan said the voting process is inconvenient to those who aren’t committed to a party. She says she is an advocate for fair access to the ballot.

“What does that mean? That means ballot props have an equal chance of getting on the ballot. I would love to see the county recorders be able to send early ballots out to independent voters without them having to take that extra step of having to go and request” a ballot, Reagan said.

“What does bring independents together? Basically, the issue of the process as being ‘rigged’,” said Ali, a professor at the University of North Carolina. “That’s not traditional left-center-right thinking.”

Charles Coughlin, who owns consulting firm HighGround Inc, believes open primaries will be more inclusive by allowing everyone to be involved in the political process. Candidates will also be able to more accurately gauge a community’s expectations.

“Rather than operating in a closed primary system where my message is to a base number of voters, I get to build an electoral coalition of my liking based on my beliefs as a candidate. I can go speak to those people,” Coughlin said.

“A party has stated principles and values. It helps people to make decisions,” Graham said. “How do we engage people to participate?”

Independents have grown into a crucial election demographic. About 40 percent of voters identify as independents, compared to about 24 percent as Republicans and 30 percent as Democrats, according to a 2015 Pew Research Center study.

The Pew Research Center shows Democratic President Barack Obama gained popularity with independent voters in 2008, but they shifted in 2016 to Republican Donald Trump.

The change shows the hearts and minds of independent voters, Reagan said.

“At the end of the day, independent voters are independent for a reason,” Reagan said. “Sometimes it’s because they don’t like the party politics.”