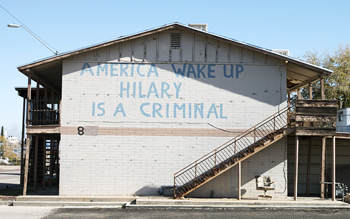 GLOBE-MIAMI, AZ — It’s here, on the drive along Arizona’s U.S. Route 66 into this historic mining community, where symbols emerge that reveal the political and social changes that roil much of America.

“Yes, We Can,” says a sign on Live Oak Street, a 2008 campaign relic from the waning, two-term Democratic president that includes a mashup of Democratic slogans like Hillary Clinton’s “Stronger Together.”

A couple blocks away on Live Oak Street, words of a different mindset in 20-inch capital letters mark the side of an apartment building.

That the losing presidential candidate’s first-name is misspelled is not nearly as startling as what the sign conveys. Globe-Miami, a traditionally Democratic dot in Republican-heavy Gila County, is showing signs of conservatism.

Some Globe and Miami residents said the two communities are the county’s exception to Republican rule. The towns provide a glimpse into changing voting demographics, as the two traditionally liberal cities are catching up with the rest of Gila County’s conservatism.

Paul Tunis, executive director of the Cobre Valley Center for the Arts in downtown Globe, is a native. His only extended time away was when he studied at Arizona State University, where he received an undergraduate degree. He studied at a graduate level in New York before coming back to his hometown in 2014 and taking over the arts center.

Now 32, Tunis said Globe and Miami managed to mostly hold onto liberal politics while the rest of Gila County has started to trend conservative. The mining industry has played a large role, he said.

The higher earners in the industry have typically voted conservative, he said, although many of them commute in Maricopa County, so their right-leaning votes won’t affect Gila County’s numbers at all. Conversely, those who earn less haven’t been pleased with the right, so they’ve often voted Democratic, he said.

Tunis said the Globe-Miami area has provided Arizona with some of its more high-profile Democratic politicians. That’s hand-in-hand with the area’s traditionally liberal, labor-focused politics, he said.

The late Rose Mofford, former Arizona governor, was from Globe. Ed Pastor represented Arizona’s 7th Congressional district prior to Rep. Ruben Gallego. Pastor was born in Claypool, just outside of Globe-Miami, and served in the U.S. House of Representatives as a Democrat.

“Miami in particular has had some very prominent political figures,” Tunis said. “Ed Pastor … kind of came from the culture of Latinos in the area identifying with the Democratic Party.”

Laido Rodriguez, a 73-year-old Miami resident who works part-time at Barber John’s in downtown Miami, was born and raised in neighboring Globe. He was drafted for the Vietnam War in 1965 and served in the Marine Corps. After returning to the Globe-Miami area, Rodriguez started as a commuting student at ASU. He ended up working in the local copper mines — a life story not uncommon for residents of the area.

Rodriguez works with John Porto, the owner of Barber John’s. Porto also voted for Clinton, but he said he wants to see what Trump will do once he’s in the White House.

Porto and Rodriguez said the community has been traditionally liberal, making it an outlier in Gila County. The county voted nearly 63 percent for Trump in the general election, compared to 31 percent for Clinton, which is in keeping with more conservative regions in Arizona. The latest U.S. Census Bureau data shows Globe has a 36.8 percent Hispanic community — higher than the state average of 29.6 percent.

The demographics distinguish Globe-Miami from some of the more traditionally conservative areas in Gila County, such as Payson, which has a Hispanic population of 9.7 percent.

One Payson precinct overwhelmingly threw its support behind Trump, according to documents from the Gila County Recorder’s Office. The precinct shows Trump winning 72.69 percent to 21.48 percent. Another precinct shows an even wider margin of Trump’s 74.19 percent to Clinton’s 19.96 percent.

Although Globe and Miami residents remember communities that were predominantly Democratic, the 2016 county election numbers show a strong majority voting for Trump and other Republicans.

In previous elections, the county did vote Democratic. In 1992, Bill Clinton handily won Gila County. He took 41 percent of the vote, while then-President George H. W. Bush took 31.3 percent, according to documents from the Arizona Secretary of State’s Office.

However, the shift toward conservatism started in the next election. In 1996, Republican Bob Dole would take 35 percent of the vote in Gila County.

This year, the presidential race in Globe-Miami was uneven, according to records from the Gila County Recorder’s Office. Some Globe precincts had Trump and Clinton both at 43.75 percent. Other Globe precincts show Trump trouncing Clinton 69.31 percent to 24.52 percent.

Miami had a slightly different Election Day. One precinct had Clinton beating Trump with 54.26 percent of the vote, compared to his 37.50 percent.

Lois Brantley lives in Globe and voted for Trump. She said she wants to see the economy resurge following Trump’s ascension to the presidency.

“I was looking for somebody who really was not a career politician and has an ability to be able to get a lot of people who knew things about politics, who are good in finance, marketing, business practices, that could build up our country and make it stronger,” she said. “Bring our jobs back to the United States, help people who need help.”

Brantley said she wants to see taxes lowered for individuals and businesses so they could spend more and put that money directly into the economy.

Rodriguez said he’s seen the conservative shift throughout his life and credits it to changes in the mining industry.

“I came back and started working in the mines and there was a strong political Democratic Party here with most of the elderlies that are already gone,” Rodriguez said. “The unions were very strong in the mines and…things started changing, turning around on us, and we have no unions in this area anymore.”

In addition to a lack of unionized work forces, Rodriguez said increasing EPA regulations on the mining industry have begun to move the area toward a more conservative bent.

“This area used to be pretty much liberal,” Rodriguez said. “Not much of a conservative community. But as time has gone by and with all these regulations affecting the mining industry and stuff like that, I think it has had an impact…and we’re just kind of hanging by a string in these communities.”

Rodriguez voted for Clinton but said he wants to see Democrats and Republicans see what Trump will do now that he’s won the presidency.

“I think that we have to give him a chance and try,” he said. “Like Hillary said, have an open mind for him.”

In a small barber shop in downtown Miami, Porto said customers often came in and contested political points leading up to the election. Although he said he’s not sure what a Trump presidency will look like, he voted for Clinton because he’s a registered Democrat.

“A lot of them say they’re going to get back to being great again,” Porto said. “So we’ll just have to wait and see what happens.”

Some are seeking to latch on to a conservative movement they hope will move the economy forward.

Globe resident Michael Wilson is currently unemployed. Although he didn’t vote in the general election, he said he wants to see Trump revive the economy as president.

“I’m hoping that he holds true to what he’s saying — that we’re going to be able to get people jobs again,” Wilson said. “I’m hoping he can put people back to work because I am out of work. I’m not one of those who wants to live off the d–n government.”

Judy Alexander, 66, president of the Cobre Valley Republican Club, also attributes the county’s rising conservatism to frustration with the economy.

“I know that when I first moved there, they were predominantly Democrat in all of the elected positions in the county,” said Alexander, who has lived in Globe since 1992. “And since then, we’ve changed that gradually.”

Now, the sheriff, county schools superintendent, recorder and assessor are all Republicans. The county treasurer is a Democrat, according to 2016 election results.

Alexander said the definition of Democrat has changed along the years, as well. The Democratic Party has become increasingly progressive and swung farther to the left, leaving some who used to be Democrats excluded by their party, she said.

“I don’t think that they go along with this progressive, Democrat platform anymore,” she said. “My family was Democrat at one time and they weren’t the type of people that are the Democrats today…We don’t like being torn apart. We want what’s best for our families and the stuff that’s coming from the Democratic Party — I think people are feeling disenfranchised.”