[OPINION] Goldwater: Where does my party go after Trump? Look to the sun 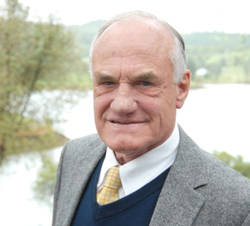 I was a young man when my dad lost the presidency on Nov. 5, 1964. He lost by a lot, but I will always be proud of him. There he stood giving his concession speech, forcefully articulating his conscience that would subsequently lead to a conservative movement.

More than 50 years later, has the Republican Party found a new way forward?

To repeatedly win, I don’t think romanticizing bygone days will be sufficient. Instead we must embrace innovation, from rooftop solar power to self-driving cars.

History looks more kindly now on my father’s landslide loss. The Republican Party used that moment to do some soul searching. Years later, after all of the questioning and ridicule subsided, the GOP capitalized on the Goldwater shakeup to achieve some of our party’s most historic and important victories.

Now we must confront a similar dissection. What does Trump mean for Republicans? Is he a blip on the radar, or all out realignment?

What we can capture immediately is that we still need to look for ways to grow our base and attract young voters, while embracing the conservative principles that have guided us all along.

Over the past few years, I’ve been involved in a national debate on behalf of many in the solar industry. We are confronting attacks from utility monopolies that are opposed to the freedom and savings rooftop solar panels provide homeowners. At its core, the discussion is about innovation and the new versus the old way of doing business.

Energy choice is much like arguments from Republicans around school or health care choice. It’s about the free market and competition. It’s about independence. It’s about fighting for a better future.

Energy choice and solar energy independence are attractive concepts to large swaths of voters across this country. It has the power to help unite, excite, and hopefully grow the Grand Old Party into something new, fresh, and future-focused. Just look at the data. Nine out of 10 voters, both Republican and Democrat, support more solar energy.

We must embrace this technology in ways that champion property rights and energy independence.

Trump’s message was about restoring the American dream — a dream where innovation creates jobs and Americans have the right to decide our own destiny. Dreamers and innovators exist in small businesses, garages, and classrooms across the country. Leaders like Ronald Reagan and John Kennedy gave our country goals that looked to the future, not the past.

I’m hopeful that President-elect Donald Trump will embrace this issue as a way to get American working again while pushing America to be more energy independent.

Our messengers need to espouse policies that inspire, give hope, and allow people to understand that we are the party of freedom and individual responsibility, and the party that tackles future challenges head on — not one of generations past. The fact that we captured the White House and maintained control of both chambers in Congress shouldn’t alter this pivot one iota.

Indeed, I think more, future success will demand it.