If an Arizona resident harvests rainwater, will rebates come? 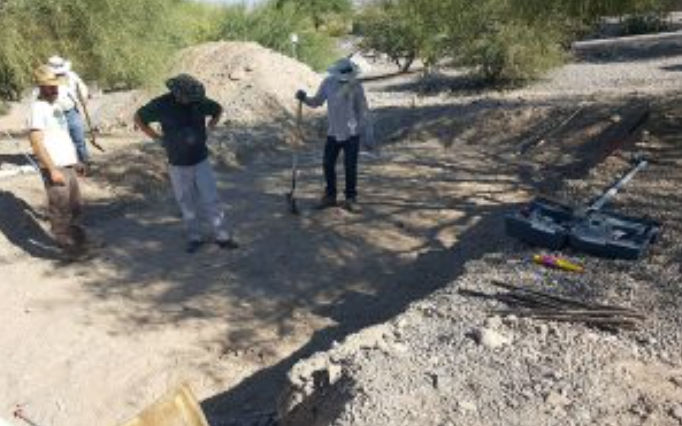 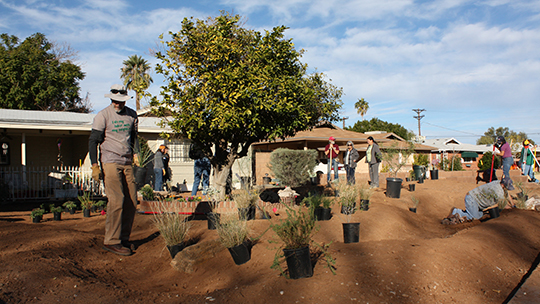 ucson and other parched Arizona cities offer rebates for businesses and homes that harvest rainwater, but the practice struggles to gain momentum in the Valley. The ancient method can conserve thousands of gallons of water, reducing reliance on groundwater and other sources. Rebates can motivate people to put in water-collection tanks or landscape design systems to capture rain for indoor and outdoor use, conservation experts say. 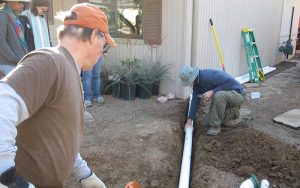 Tucson leads Arizona in encouraging rainwater harvesting. Since 2010, city law requires at least half of the landscaping for any new building use rainwater. The city offers up to a $2,000 rebate for rain harvesting systems at homes and businesses that has become more popular over the years. Prescott and Flagstaff also offer rebates.

But in Maricopa County, where about 60 percent of Arizona residents live, experts said none of the 27 cities or towns offer rebates specifically for rainwater collection or storage systems.

“There are nowhere near enough people doing this,” said Tucson advocate Brad Lancaster, who harvests rainwater for almost all of his daily needs, from drinking water to washing dishes. “I don’t say this to be Dr. Doom, I say this to inspire, but we are moving at a glacial pace with this.”

To harvest or not harvest, that’s the question

“Phoenix cities need to adopt a rebate with specific language to rainwater harvesting that can help people understand the benefits of these systems,” said Ryan Wood, program manager for the Watershed Management Group’s Phoenix branch. “Rebates would help encourage folks to invest in a system.”

But some city leaders feel otherwise.

“It isn’t even a blip on our radar,” said Phoenix spokeswoman Stephanie Bracken.

The city believes that conservation practices are already strong, Bracken said, citing that overall water usage has declined since 1985 and because of this, such rebates aren’t needed.

Some cities, including Mesa and Chandler, offer versions of “turf removal” rebates, but simply eradicating grass is a “missed opportunity,” Wood said.

“The rebates are not specifically for passive earthworks and is missing the specific rainwater harvesting rebate as offered in Tucson,” Wood said.

Instead, business and homeowners should craft berms, swales and basins, a method otherwise known as “passive harvesting” or “earthworks,” to direct rainwater throughout a landscape. Done well, the rain could not only more effectively water desert plants, but also help recharge groundwater.

Lancaster encourages people to start with passive systems, where the cost of a new landscape is sometimes just “time and a shovel.”

For “active harvesting” systems, or ones that utilize a storage tank of sorts, the price tag starts at around $200 for a small residential home, but can cost thousands for commercial businesses, depending on factors such as location, the size of a building and the desired amount of storage.

One inch of rain on a 1,000 square-foot roof can collect about 600 gallons of rainwater to be stored for later indoor or outdoor use. Valley residents experience about eight inches of annual rainfall, potentially capturing 4,800 gallons of water a year.

“Simply put, every gallon you capture is a gallon you don’t need to pump,” Wood said.

Expanding the rainwater cause 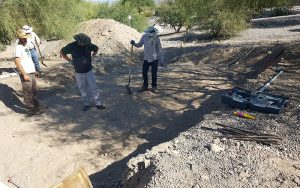 Businesses and organizations look to expand rainwater harvesting efforts into areas where the practice is not as common.

The Tucson-based Watershed Management Group, which educates communities on how to implement environmentally friendly practices, opened another office in Phoenix about six years ago to start a long-term vision of expanding further into the Southwest.

The sheer size of the Phoenix area is a challenge for harvesting expansion, Wood said.

“There are over four million people here. Are we hitting every home? Do they even know about us? We have more outreach to do,” Wood said.

One of the group’s latest efforts is Hydrate Arizona, a five-part in-person series that introduces class participants to rainwater harvesting methods. The program launched in Phoenix 2015 and has since expanded to different cities including Mesa and Glendale, growing in class size from about 20 participants to more than 50, Wood said.

Cities in the Valley and elsewhere promote water conservation through other methods, including seminars and classes.

Wood described the overall progress as “slow moving but steady,” which seems to be the theme for other Arizona cities that now offer rebates, including Prescott.

When Barnabus Kane opened Skywater Rainwater Collection Systems in 2005, it was the only business in Prescott providing harvesting systems, he said.

“There were always interested homeowners, but it was very much a backyard hippie thing at first,” Kane said. “Only the outliers were doing it.”

Today, Kane’s business has expanded to include large-scale commercial systems in addition to residential systems. Some of the systems have been built outside of Prescott, where a rebate of 50 cents for every gallon of storage up to $500 is available. 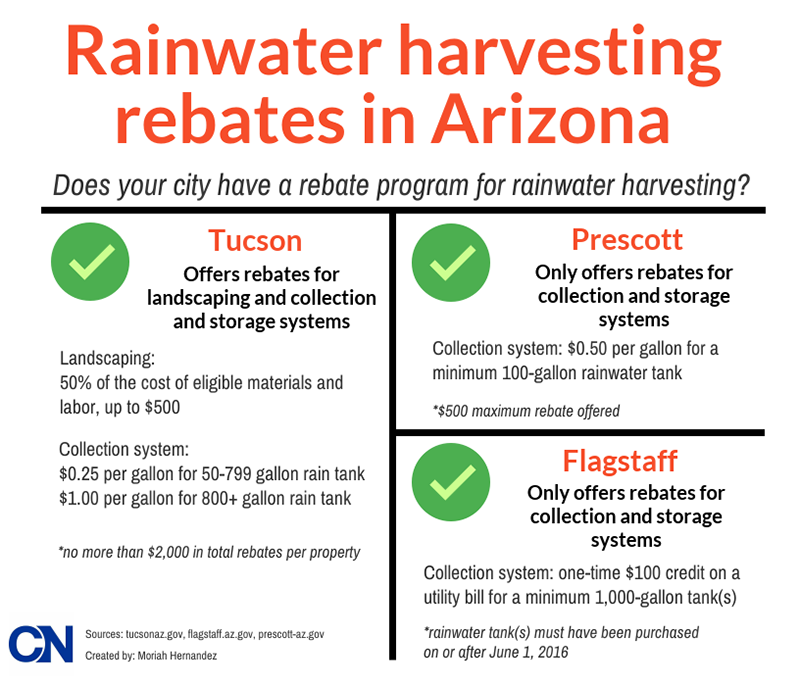 The system has collected nearly 270,000 gallons of water since the installation in July, according to Briana Morgan, water conservation specialist with Lake Havasu City. The water covers 100 percent of the corporate yard’s irrigation needs.

Committed advocates and a city’s history with drought influence the creation of rainwater harvesting policies as progress sometimes comes from necessity and passion.

“Tucson’s water crisis really spurred development,” said Catlow Shipek, a founding member of the Watershed Management Group. “I see Phoenix without having that conservation ethic at the residential level, it will take time to build that momentum.”

Decades ago, Tucson’s only water source was its rapidly depleting groundwater, so the demand in other areas such as Phoenix, “was not quite as immediate,” Lancaster said. 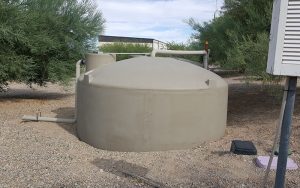 Tucson’s rebate program has grown 35 percent since the 2012-13 fiscal year, from 296 applications processed for rainwater harvesting rebates to 438 so far this fiscal year, a water-department spokesman said.

“Prior to 2006, water harvesting for the most part didn’t exist,” Lancaster said. “It was here, but was very hidden and practiced by very few.”

Lancaster, who has lived in Tucson for nearly fifty years, said he uses only 10 to 12 gallons of rainwater a day, about 10 percent of what the average Arizonan uses. He started working with the city in the early 2000’s on the possibility of new laws and rebates.

Water conservation specialists hope that Tucson and other cities will continue rainwater harvesting efforts and others will take up the banner.

“We can’t get too proud here otherwise we’ll be blinded by that,” Lancaster said. “We need to continue evolving.” 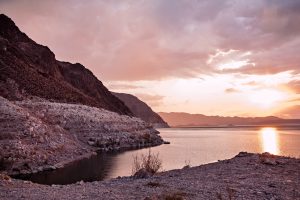 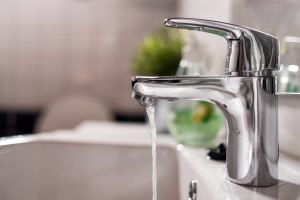 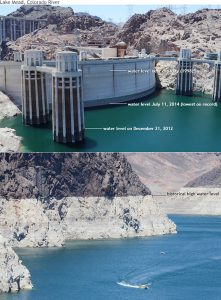 State lawmakers gear up for tough decisions on water 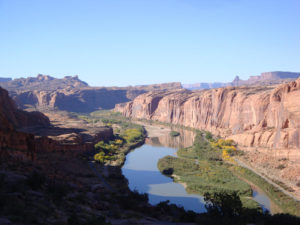 Colorado River Opinion: Our tribe can provide an immediate drought supply while Arizona explores larger augmentation projects. But we can’t make our water available without 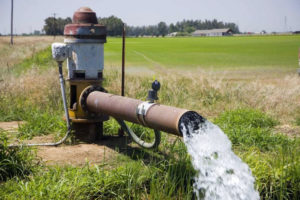 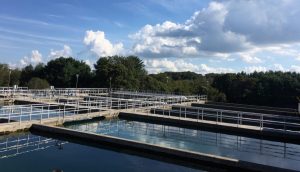 By Madelaine Braggs | Rose Law Group Reporter Water utility companies are feeling the pressure to expand services, as the housing market booms outside of