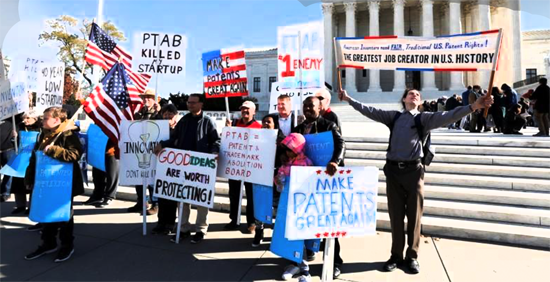 Protesters gather outside the Supreme Court, as the justices will hear arguments over whether a federal administrative process frequently used by high technology companies to invalidate patents they are accused of infringing violates the U.S. Constitution, in Washington, U.S., November 27, 2017./ REUTERS/Yuri Gripas

U.S. Supreme Court justices on Monday appeared divided over whether a federal agency’s in-house process for challenging patents violates the constitutional rights of patent owners, leaving the fate of a system that has led to a high rate of patent cancellation uncertain.

In one of the most important patent cases to come before the Supreme Court in years, the nine justices heard an hour of arguments in a dispute over the U.S. Patent and Trademark Office’s patent review proceeding known as inter partes review (IPR). A decision to strike down the reviews could fundamentally change the way patents disputes are litigated in the United States.

While some of the court’s liberal justices voiced support for the process, other justices raised concerns that the government might be able to revoke patents too easily.

“There is no doubt formation of the Patent Trial and Appeal Board (PTAB) by the America Invents Act and the various post-grant proceedings such as Inter Partes Review (IPR) proceedings administered by the PTAB, have made challenges to patent validity far more accessible and effectively curtailed ‘patent troll’ activity.

The pending Oil States vs. Greene’s Energy Group, et al. case has the potential to create significant chaos if it determines IPRs are unconstitutional. Given the policy interests in increasing patent quality and decreasing frivolous litigation, this outcome seems highly unlikely. Instead, the court will likely adopt the position put forward by the government – patent rights are a limited franchise, similar to lease of public land and not a grant of title to private property.

If the court upholds the constitutionality of the PTAB’s ability to perform administrative review of granted patents as a level of quality control over the USPTO, it could continue to drive a shift toward more thorough patent procurement practices with companies aiming to ensure that their patent assets can withstand post-grant challenges.”

← PREVIOUS ARTICLE
Patent ‘trolls’ recede as threat to innovation. Will justices change that? 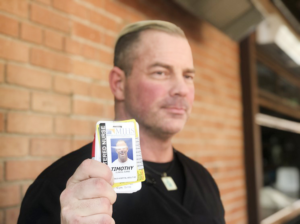