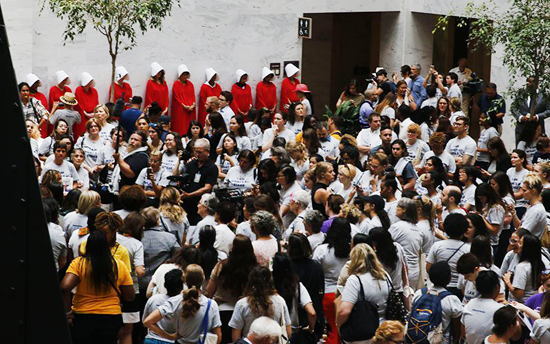 Many of the protestors outside the hearing on Supreme Court nominee Brett Kavanaugh were dressed as characters from “The Handmaid’s Tale, a story about a dystopian future./Photo by Renata Cló | Cronkite News

Arizona Sen. Jeff Flake said he was impressed by Supreme Court nominee Brett Kavanaugh’s “respect for the law” and his “kindness and decency.”

Sedona resident Jeff Jeans was in Washington to say he worries that, as justice, Kavanaugh could be a death sentence for cancer patients like him, who were saved by the pre-existing conditions provisions of the Affordable Care Act.

The two Jeffs represented different sides of the debate as the Senate Judiciary Committee held the first of several days of what are expected to be contentious hearings on the nomination, with Tuesday’s proceedings interrupted often by protesters.

While the hearing split along party lines, Flake did side with Democrats on one point, saying he wanted to know how Kavanaugh would stand on the separation of powers issue if he had to rule on a case involving President Donald Trump, who nominated him.

“A lot of the concern on the other side of the aisle stems from the concern of an administration who doesn’t seem to understand and appreciate separation of powers and the rule of law. I have that concern as well,” Flake said during his opening statement Tuesday.

He cited Trump’s feud with Attorney General Jeff Sessions, pointing to two tweets on Monday in which the president accused Sessions of bringing “Obama era investigations of two very popular Republican Congressmen … to a well-publicized charge just ahead of the Midterms.”

Flake said such examples of the administration’s pressure on Sessions to “punish his (Trump’s) enemies and relieve pressure on his friends” is reason for concern, and something he plans to question Kavanaugh about.

But Flake was otherwise conciliatory toward Kavanaugh, saying he was impressed by Kavanaugh’s participation in two Boston marathons, which he said showed a competitive spirit, and his community work as a coach for his daughter’s elementary school basketball team.

Those were light moments in an otherwise combative day of hearings.

Not only did Democrats ask whether Kavanaugh could rule fairly on a case involving Trump but they also demanded – repeatedly and unsuccessfully – for a delay in the hearing while they sought more records on the nominee’s background.

Democrats argued that they had been given less than 10 percent of documents on Kavanaugh, who has been a judge on the D.C. Circuit Court for 12 years as well as being staff secretary to President George W. Bush and a lawyer on the independent counsel investigating President Bill Clinton.

Republicans countered that there have been hundreds of thousands of documents already provided on Kavanaugh, more than for any previous Supreme Court nominee. They said that the more than 300 court opinions Kavanaugh has written, and the thousands more cases he has been part of on the circuit court, should be more than enough to prove he is qualified for the job.

But it’s Kavanaugh’s record as a judge that worries people like Jeans.

He was a lifelong Republican before being diagnosed with throat cancer in late 2011. Jeans said the Affordable Care Act saved his life: His wife enrolled him in the Pre-existing Conditions Insurance Plan in April 2012.

“Without an insurance card they were going to let me die,” Jeans said.

He has been cancer-free for more than six years, but worries that others will not be as lucky if Kavanaugh is confirmed.

Jeans said a lawsuit by 20 states – including Arizona – that challenges the constitutionality of the ACA could be ruled on soon by a federal judge in Texas. If the judge finds the law unconstitutional, it could end up before the Supreme Court.

Jeans said Kavanaugh has ruled against the law before and worries he would not rule in its favor on the high court.

“The law’s already been decided by the Supreme Court once,” Jeans said. “He would be legislating by changing that decision.”

Jeans was in Washington to rally against Kavanaugh’s appointment, but was not part of the protests in the Judiciary Committee hearing room Tuesday. As senators tried to talk over them, protesters yelled, “Stop this hearing,” “Vote no,” “Protect women’s rights” and more, usually right after a Republican senator spoke in support of the nomination.

Several were escorted out of the hearing by the Capitol Police and arrested.

Other protesters gathered outside the hearing in the atrium of the Hart Senate Office Building. Some held signs, others dressed in costumes to make a statement and some told personal stories about their reasons for opposing Kavanaugh.

The protesters that seemed to grab the most attention were a group of women dressed as characters from “The Handmaid’s Tale,” in reference to the novel and television series about a misogynistic future dictatorship in which women have no rights.

They were with Demand Justice, which was there opposing Kavanaugh’s nomination “because he represents the greatest threat to the right to legal abortion” since the court recognized that right in its Roe v. Waderuling, said Demand Justice adviser Lori Lodes.

NEXT ARTICLE →
The transition from John McCain to Jon Kyl