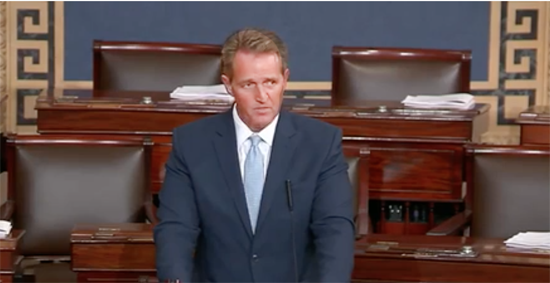 Liberals excoriated Flake as a “coward” for “caving” to Trump and Republican leadership and for “pretending to have a conscience.”

U.S. Jeff Flake early this week made his second visit this year to New Hampshire, a key presidential proving ground.

But if Flake, R-Ariz., was aiming to stoke speculation about his White House ambitions in 2020 with his Monday appearance in the Granite State, he may have further doused them by week’s end.

On Friday, Flake signaled he would vote to confirm Brett Kavanaugh to the Supreme Court, again falling into line with President Donald Trump, the man he ostensibly would oppose in the GOP presidential primaries or as an independent candidate.

In doing so, he likely has handed Trump one of his biggest victories yet and once again left unclear what separates the two Republicans, other than their rhetorical tone and style.

And liberals excoriated him for it on social media as a “coward,” for “caving” to Trump and Republican leadership and for “pretending to have a conscience.”

Brenda Behnken, a Republican from Tempe, said Flake talks a good game but doesn’t back it up.