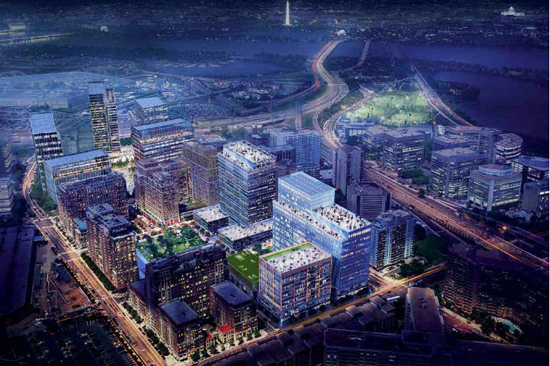 A rendering of Amazon’s future headquarters just outside Washington, D.C./:Courtesy of JBG Smith

After a yearlong and very public deliberation over the location of its second headquarters, Amazon this week disappointed some policymakers when it announced that it would split HQ2 into two locations, one in New York City and the other in the Washington, D.C., metro area.

In choosing New York and D.C., Amazon opted for two cities that have led the economic expansion since the end of the last recession in 2009, far outpacing the rest of the nation in job growth. The decision drew the ire of politicians at the state and federal levels, along with others who had called on the tech giant to place its second headquarters in a city where it could play a more transformative role in the economy.

Yet a new study from the Urban Institute suggests that landing such a large corporation isn’t actually the best way to build a local economy and spur job growth.

Instead, the report says, cities should focus on growing existing local firms, not trying to lure out-of-town companies and poaching firms from other cities. “Most job expansion and contractions come from birth and deaths of homegrown businesses or expansion or contractions of existing home-based businesses,” says Megan Randall, a research analyst with the Urban-Brookings Tax Policy Center and a co-author of the report.