Despite some major economic development projects being “on hold” for now, Casa Grande Mayor Craig McFarland said he thinks the city is “poised to grow rapidly” Thursday.

In his annual State of the City address, the mayor told a room full of residents at the city’s new Community Recreation Center why he thinks Casa Grande is great.

So much so that he donned an “I Heart CG” T-shirt at the end of the presentation and threw out similar shirts to the audience.

“We are really the talk of Arizona,” the mayor told the crowd. “It’s amazing how many people know where we are today.” 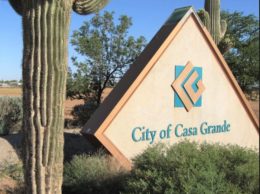