As he drove last month to Pecos Community Center for the Ahwatukee Foothills Village Planning Committee’s consideration of the QuikTrip gas station plan for 40th Street and Cottonwood Way, Derrick Johnson had a thought that turned quickly into alarm.

“I was thinking it would be nice if I could cut out back to save some time. Then I realized, ‘wait, there is no way out back,” said Johnson, a resident of the Foothills Paseo II community that is the focal point of the controversy around the proposed gas station.

It wasn’t that Johnson didn’t know how to get in and out of the community he’s lived in almost since it was built nearly 20 years ago.

What alarmed him — and now has the attention of Phoenix Mayor Kate Gallego and all three lawmakers from Legislative District 18 — is the multi-pronged danger posed by a gas station at the mouth of the only way in and out for 185 homes. 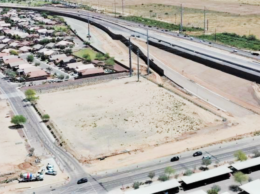