Search for airline pilots takes off at Phoenix-area airports

It’s a conundrum bordering on a crisis for the global airline industry: More people are flying to more places, but the number of pilots is not keeping up, reports Christine Negroni of The New York Times.

“Airlines have had to go to greater lengths to recruit pilots,” said Nick Leontidis, group president of civil aviation training solutions at CAE, an aviation education company. “If it took a month to recruit 50 pilots, it takes six months now.”

Demand for air travel is growing so quickly that 635,000 commercial pilots will be needed by 2037, according to a forecast produced by Boeing in 2018. The biggest need is in Asia, where an improving economy in China has resulted in more people traveling. More people are flying in the United States as well and, at the same time, pilots are hitting the mandatory retirement age of 65.

For aspiring airline pilots such as 24-year-old Ahkeel Leach, who spent his childhood traveling between his father’s home in New York and his mother’s in Britain, the industry’s challenge is a career opportunity. Though he had wanted to fly since he was a child, he did not know where to study or how to pay for it.

“My family, we’re all immigrants. Aviation is one of those things you stick in the corner,” he said. “It’s a great job, but not everybody knows there are affordable avenues or has guidance to get there.”

“Every day I’m so excited and happy to be here and happy for the fact that someone gave me a chance to achieve my dream,” Leach said from Mesa, Arizona, where he is enrolled at CAE’s American Airlines Cadet Academy, The Timesreported.

The idea that only certain people will excel in the cockpit is echoed by Lufthansa, based in Germany, which for decades has trained nearly all its pilots at its school at Phoenix Goodyear Airport.

Before they opened their cadet schools, American and JetBlue partnered with financial institutions to provide loans of up to $90,000, which would cover training. The loans are gradually paid back once pilots are working.

Airbus also started ab initio training in partnership with flight schools in Mexico and France and plans to train 200 pilot cadets each year.

Airlines hope that larger pool will include women, who now represent a tiny minority of pilots.

“They need to bring women pilots into schools and show them the really cool things you can do,” she said. “In the future, I do want to go into the community and show girls that this is a viable career path.” 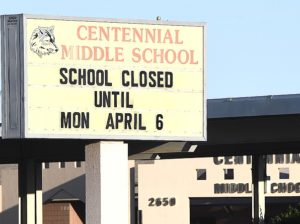 Arizona aiming to reopen camps this summer, schools this fall