Analysis: Circulation decline for ‘The Arizona Republic’ among steepest for Gannett papers

Of the 200 daily newspapers at the newly merged Gannett Co. that file print circulation numbers publicly, more than 80% are losing circulation at a faster rate than the national average and 10% are declining at twice that rate or more, according to a Business Journal analysis.

Among the state’s largest Gannett-owned publications, The Arizona Republic has seen one of the steepest declines, with a two-year circulation drop of 30.3% since 2017 translating to an annualized decline of 17%.

The Business Journal’s analysis of the past two years’ worth of circulation data filed with the Alliance for Audited Media could provide clues as to which newspapers Gannett may target with staff cuts, closures or potential mergers with other publications. Earlier this month, the $1.2 billion merger of Virginia-based Gannett (NYSE: GCI) and New York-based New Media Holdings Group (NYSE: NEWM) was completed, forming the nation’s largest newspaper chain.

New Media Holdings Group controls the Gatehouse chain of local community newspapers, which is the owner of the Arizona Capitol Times.

The new Gannett is now under intense pressure from shareholders to fulfill its vow to cut $300 million in expenses, and it’s likely that it’ll turn to its most underperforming newspapers to do so. Gannett did not respond to a request for comment on its circulation trends. 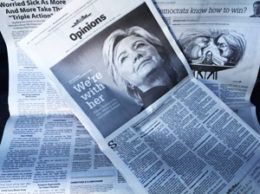 Who funds the Arizona Mirror? Not a source with a political agenda, says Phil Riske, senior reporter/writer