A judge in North Carolina lifted a confidentiality order on a trove of digital files from a deceased Republican strategist that includes thousands of documents pertaining to the last round of redistricting in Arizona.

So far, there are no plans to make them public. It is unclear exactly what information the documents contain.

Judge Vince Rozier, Jr., of Wake County Superior Court in North Carolina, on Monday lifted his previous confidentiality order, which he issued in a lawsuit over a controversial redistricting plan in that state.

At the heart of the issue are more than a quarter million digital files made by Thomas Hofeller, a Republican operative and redistricting guru known for creating heavily gerrymandered districts. Hofeller’s estranged daughter found the files after his 2018 death and turned them over to Common Cause, an advocacy group that focuses on money in politics, ethics and election and voting issues, which sued over gerrymandered legislative districts in North Carolina that Hofeller helped draw. 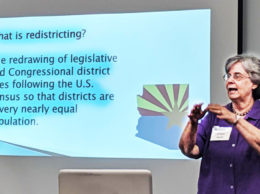