The Senate voted 51-41 Thursday to confirm Steven Menashi to the 2nd U.S. Circuit Court of Appeals.

Menashi’s confirmation was supported by McSally, R-Ariz., and all other Republicans in attendance except for Sen. Susan Collins of Maine. Sinema, D-Ariz., and her fellow Democrats opposed his confirmation.

Menashi emerged as one of Trump’s most controversial judicial nominees. He came under fire for his record as a U.S. Department of Education attorney under Education Secretary Betsy DeVos and has been blasted for past writings, including a 2010 piece about “ethnonationalism.”

← PREVIOUS ARTICLE
Paul Gosar’s Twitter stunt lands him on Tucker Carlson’s show: ‘It made my day’ 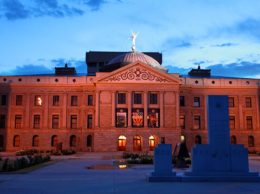