From the Editor: Bringing a Dream(er) to life in Phoenix

To say that immigration can be an incendiary topic of conversation might be a bit of an understatement. Nonetheless, it’s a big part of Jason Rose’s world these days. That’s because the president of Rose+Moser+Allyn Public & Online Relations in Scottsdale is one of the co-creators and financial backers of a musical production that’s opening at the Phoenix Theatre Company Mainstage Theatre on Jan. 29.

It’s centered on the true story of one of the so-called “Dreamers,” the young immigrants brought illegally into the country as children who want to remain here as adults.

Rose has waited five years to see the project through, and at one point wondered if it would never come to fruition. (If you’re keeping score, “Hamilton,” the mega-musical that set box-office records, took seven years to get to the stage.)

The musical, titled “Americano!,” tells the story of Tony Valdovinos, who came to Arizona from Mexico when he was 2 years old. The Camelback High School graduate didn’t find out he was undocumented until he tried to enlist in the U.S. Marines at age 18. After being rejected, Valdovinos has since moved on to work as a political lobbyist and activist.

Rose approached Michael Barnard, the theater’s musical director, about exploring the idea of a musical with an immigration theme when he bumped into him at a wedding in 2015. To Rose’s relief, Barnard bought into the idea a few months later, though the process eventually stalled.

“It was a real challenge to reconcile all of the ideas of politics, music and a storyline, and we got to a point where we went our separate ways in May 2017,” Rose said. But when the idea of focusing on a true story — Valdovinos’ story — rather than a fictional narrative came into focus, the concept crystallized.

“Tony came in and met Michael, and we went, ‘Wow, this is it,” Rose recalled.

Carrie Rodriguez, a respected Texas musician, was recruited to compose the 20 songs for the musical, which was co-written by Barnard and Jonathan Rosenberg. It had a short preview in Phoenix in February, after which major tweaks were made. At that point, Tony Award-winning Ken Davenport was brought in as executive producer, joining Rose’s newly formed Quixote Productions as the project’s backers.

Davenport’s connections in the world of Broadway will no doubt play a critical role in whether “Americano!” can become a national phenomenon, though at this point, Rose knows that in the arts world, nothing is guaranteed beyond the fact that the play with its mainly Latino cast will have a month-long run in Phoenix.

Still, Rose is certain of one thing: watching “Americano!” will move you, no matter what your political or ideological beliefs may be.

“You might agree or disagree in politics when you walk in, but you are going to think when you’re in this show,” he said. “And whether or not it confirms your beliefs or makes you rethink something, I know when you walk out you’ll have a greater appreciation of hope, resilience and patriotism. 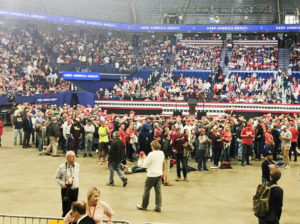