By Rachel Leingan | The Republic

Arizona State University President Michael Crow is not a candidate for the top job at the University of California system, ASU said.

Crow’s denial comes after an anonymously sourced news story by the Mercury News claimed he was a candidate for the UC system role. The story cited Pac-12 conference sources who said Crow was a leading contender for the position.

Crow was not available for an interview, Paquet said.

Former Arizona Gov. Janet Napolitano, who has been leading the UC system since 2013, announced last year that she would be stepping down from the role.

NEXT ARTICLE →
Do you make more than a teacher? 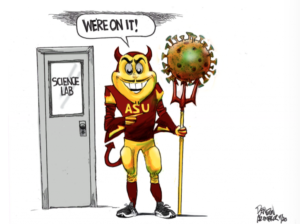