There are over 800,000 DREAMers in the United States. Young adults, living daily in uncertainty as to whether their protected status under President Obama’s 2017 Executive Order (Deferred Action on Childhood Arrivals) will be upheld in the face of legal challenges by the current Administration. Young “undocumented immigrants,” brought to this country, many at a very early age (on average, 6), under circumstances beyond their control, facing the possibility of deportation.

Tony Valdovinos is one of them. Actually, one of us ~ an American at heart. A man whose personal journey is now the focus of AMERICANO! ~ a new musical co-authored with Jonathan Rosenberg and directed by Michael Barnard, The Phoenix Theatre Company’s Producing Artistic Director. (The “World Premiere” of the show runs through February 23rd.)

AMERICANO! is an effusive and exuberant celebration of idealism and fortitude as well as a fervent call to action. There is no doubt that this vibrant musical is also political theatre steeped in a sense of urgency about the need to do justice for the DREAMers. (While local politicians were sure to appear in tribute to a point of Phoenix pride, it has yet to be seen whether the power of Tony’s story moves them from rhetoric to action.) Yet, the show’s inherent political vibes in no way detract from its very human scale and emotional impact.

NEXT ARTICLE →
[OPINION] Americano! is the musical immigrants need to touch your heart 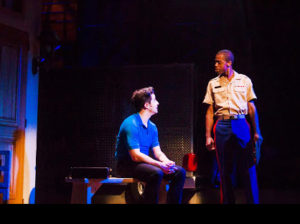