Construction is underway on a new Hampton Inn & Suites by Hilton near Metrocenter Mall in Phoenix, a project that hotel and city officials hope will be a catalyst in the area thirsty for redevelopment.

The $15 million, four-story hotel will have 101 rooms. It will be one of the first Hampton Inns designed with the 2020 prototype, which incorporates advanced technological controls over air conditioning, lights, televisions and other amenities. Construction on the hotel, which began over the weekend, will take 12 to 14 months.

Dan Norville, president and founder of SiO Hotels, which has ownership in both the Hampton Inn & Suites under construction and the adjacent DoubleTree by Hilton, noted that the submarket has not seen very much new hotel construction during the past 20 years. As the DoubleTree continued to grow its occupancy, the need for an additional hotel became apparent. 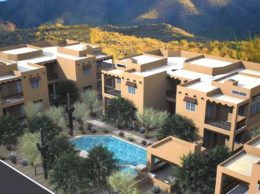