Valley ER nurse Timothy Costello is suing one of the biggest hospital systems in Maricopa County for its ban on employee medical marijuana use, just over a week after Phoenix New Times first wrote about his situation.

The lawsuit against Costello’s employer, Valleywise Health, demands no monetary damages from the hospital. Instead, it seeks a judgment in court that the company’s policy is unconstitutional, discriminatory, and in violation of state medical marijuana law.

The complaint filed Wednesday in Maricopa County Superior Court describes how the 42-year-old Costello got a medical marijuana card in December after deciding to stop taking prescription pills for his chronic back pain and trouble sleeping.

The Surprise resident and Air Force veteran told his boss at Maryvale’s Valleywise Medical Center he was getting a medical card, hoping transparency would be the best policy. Instead, the company told him he’d be fired if he ever tested positive for marijuana metabolites, even if he only consumed cannabis outside of work. 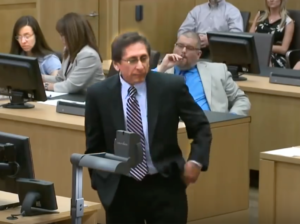