U.S. Rep. Ann Kirkpatrick of Arizona is returning to Congress after a six-week absence for treatment of alcoholism.

In January she revealed she was suffering from alcohol abuse and would seek treatment. In a statement Wednesday she thanked her family, staff, and constituents for what she called overwhelming support. The Southern Arizona representative said recovery is a lifelong process and she will share more about her experience.

Kirkpatrick will hold a “Congress on your corner” event this weekend as part of her return.

The Democratic lawmaker told The Arizona Republic that she didn’t know she had a problem with substance abuse until she fell on a Metro platform in Alexandria, Virginia, in January. She says she’s unsure how much wine she had with lunch before rushing to the Capitol for a vote that came three hours earlier than expected.

She suffered a fractured spine, cracked ribs and a gash in her head. She says she’s grateful her injuries weren’t more severe and appreciates the support of her family and congressional colleagues.

← PREVIOUS ARTICLE
On my radar: Public reacts to end of candidate endorsements 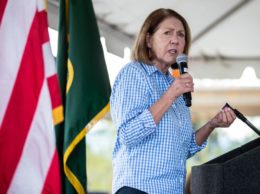