The Monday Morning Commute: Ask the traffic engineer: What’s the story with the freeway numbering system in Phoenix?

First, we need to acknowledge the Arizona Department of Transportation for having the foresight two to four decades ago to construct the freeways where they did. Oddly and fortunately, those are the exact locations where all the cars are!

I-10 and I-17 are part of the Interstate Highway System. State routes 51, 101, and 202 are state highways. US Route 60 and (US Route 66 of Tod and Buz fame) are federal highways that were created prior to the interstate highway system.

The official name for the Interstate Highway System is the Dwight D. Eisenhower National System of Interstate and Defense Highways. Like all good federal, state, and local legislation; this 1956 Federal Aid Highway Act recognized that the people of our nation have multiple perspectives with a variety of needs and desires.

As some recall, or learned back in the days when children attended school, President Eisenhower, as Supreme Commander of the Allied Expeditionary Force in Europe, was one of the heroes of the Second World War – responsible for the famous successful-against-all-odds invasion of D-Day on 6 June 1944. (Incidentally, the D signifies nothing, simply an emphasis of THE DAY.) From his military experiences, President Eisenhower learned much about logistics and the necessity of transport.

After World War Two concluded, then President Harry Truman appointed General Eisenhower to command the North Atlantic Treaty Organization in Europe. In this position, General Eisenhower visited Germany and was impressed by the autobahn which had been initially constructed in 1938.

After being approached by both the Democratic and Republican parties, he decided to be Republican and was elected president in 1952 and 1956. During President Eisenhower’s first term, he was confronted with the reality that war with other nations was always a possibility. He recognized the necessity of efficiently transporting military equipment, materiel, soldiers, and vehicles across our large nation in all directions.

He also recognized that in the 1950’s this necessary military transport was impossible. His motivation was military, though he understood that many other elected leaders believed there were other benefits from travel throughout the United States. So, President Eisenhower and others created a strong coalition very favorable to a United States version of the autobahn. In 1956, the House of Representatives vote was 388 to 19 and the Senate vote was 89 to 1.

The interstate highway system is owned separately by each state, though is primary funded by the federal government with strict federal mandates. Requirements include no signals, design speeds of 55 miles-per-hour or greater, physical separation between different travel directions, minimum of two lanes-per-direction, and 12-foot lanes.

Traffic engineers are so organized, analytical, and careful. They even knew that Hawaii was south of both Texas and Florida. Everyone should have a friend who is a traffic engineer.

Is the question answered, yet?

The initial plan was quite interesting . . . and now, unfamiliar.

OK, this is perfectly rational, at least the I-10 is east-west and the I-17 is north-south, and with only one interchange between the two. A freeway on Camelback Road called the Paradise? No surprise that was never built. A freeway on Scottsdale Road for three miles? A freeway through the Indian Bend Wash in the heart of Paradise Valley? Must have been non-traffic engineers that thought of all three of those, and the traffic engineers stopped the idea. . . . Or maybe the reverse?

Did we really need three east-west freeways in four miles? Well, not today, though would have been nice before and after our coronavirus low-traffic period. Ever heard of the I-10 Reliever in the west valley? Ever been to Los Angeles? Afterall, what are our cities except the spaces between the freeways?

The Papago Freeway becoming the Beeline Highway? Quite sensible. The initial name of McDowell Road was the Phoenix-Payson Highway.

Then came the 1980’s. The north-south freeway in Scottsdale was sensibly moved to Pima Road, continued straight north for several miles, and squares off nicely just north of the Scottsdale Airpark. (In those years, the Aqua Fria, or the east-west portion of the Pima Freeway, was planned for Bell Road, not Beardsley Road where it was eventually constructed).

We’re still good: an east-west I-10 interchanging once with a north-south I-17.

Still have that Paradise Freeway on Camelback Road – now on the edge of Old Town Scottsdale, extending adjacent to Scottsdale Fashion Square, past Don and Charlies, through the Indian Bend Wash, past the Monterey Golf Course (which became the Scottsdale Culinary Institute, then a big beautiful empty building prior to demolition), past Pima Elementary School and Chestnutt Park, to connect to the Pima Freeway.

The Papago Freeway extended between the Papago Buttes, adjacent to the Desert Botanical Gardens, through several then highly successful automobile dealerships, next to the successful Los Arcos Mall, past Motorola, to interchange with the Pima Freeway, and continue east.

Traffic engineers and transportation planners may be mighty smart, but they’re sometimes not-too-good at making friends in high places.

So, in the mid-1980’s, with the Arizona Department of Transportation anxious to complete the freeway designs they had begun, already purchasing homes fronting Camelback Road in Phoenix and adjacent to Pima Road in Scottsdale, and preparing for construction; a City Council meeting occurred in Scottsdale City Hall. More than a few people were in attendance.

One of the City Council members stated, “there will never be a freeway in Scottsdale”.

The Arizona Department of Transportation had a Grinch Who Stole Christmas moment. They knew that the construction of freeways through residential neighborhoods and commercial corridors was most logical from a transportation perspective. Converting homes and businesses to freeways had been so successful in New York, Detroit, Chicago, St Louis, Los Angeles, Seattle, San Francisco, and other metropolitan areas. Who knows, maybe they read, The Life and Death of Great American Cities by Jane Jacobs. In any event, the transportation planners discovered that perhaps there was more to community than freeway mobility.

Within two years, the Phoenix area freeway plans had changed. The Paradise Freeway vanished. The Papago Freeway became combined with the Maricopa Freeway, moved south to just north of the then Rio Salado usually dry riverbed and now Tempe Towne Lake. The Pima Freeway was moved from Pima Road east to be within the Salt River Pima-Maricopa Indian Community. The east-west portion of the Pima Freeway was relocated from Bell Road to Beardsley Road. And west of I-17? There was no desire to attempt to build a second freeway parallel to and south of I-10. Resistance had proven not futile.

Now the freeway planners were stuck with only three disconnected freeways entering and exiting central Phoenix, and the eventual reality that there would be very strong transportation desire lines between the three.

(SR-51 not shown? Because of the anti-freeway backlash, the predecessor to the Piestewa Parkway was initially constructed as a surface street with signalized intersections for McDowell Road, Thomas Road, and Indian School Road. Soon after it opened as an arterial street, it was quickly reconstructed as a limited access freeway with interchanges. There’s more than one way to overcome opposition.)

So. What to do? Central Phoenix needed a surrounding grid freeway system. Too many cars wanting to be in the same small area – just like every metropolitan area on our planet. Not sure just yet about other planets. Elon Musk will soon have a report.

Oh, the sharp curve in SR-202 at 52nd Street? Probably not to preserve the Papago Golf Course. There were rumors of significant and substantial Hohokam archaeological artifacts near the Papago Buttes. Websearch 1996 New Moreland Road Papago Park. The archaeological survey is marked confidential and restricted from public view.

Ok fine, the numbering question. Us people in cars need every one of the numerous freeway lanes in all four directions between 27th Avenue and 24th Street, and between McDowell Road and the Salt River. So, that little freeway box exists. And we’re very glad it does: presumably so, based on how often and how many of us use it.

Anyway, it’s only confusing for the first few decades you drive it.

As the famous Clay Thompson often said, “try not to worry about it.”

NEXT ARTICLE →
The Monday Morning Commute: Ask the traffic engineer 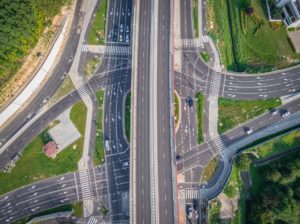