The state and its major metro areas have turned an economic corner.  The state gained 45,300 jobs last month.  This net gain consisted of private sector job gains of 58,900 and government sector jobs losses of 13,700 mainly due to the seasonal hiring pattern surrounding schools.  Considering that the state didn’t reopen until May 16th, this was a good showing.  Keep in mind that employment is still down 163,100 jobs from a year ago.  But, last month, employment was down 218,800 jobs from a year ago.  So, we are moving in the right direction. The recovery has started.

Seasonally adjusted employment increased 2.4% for the month, which was above the national increase. Keep in mind also that the decline in Arizona was considerably less than the country as a whole.  From the February peak to the April trough, national employment declined 12.8%.  Statewide, Arizona’s decline was “only” 7.7%.

Also worth noting was the significant decline in the state’s unemployment rate.  From an unemployment rate of 13.4% in April, the May level fell to 8.9%.  This compares to the national numbers that fell from 14.7% in April to 13.3% in May.

Retail sales were up 17.7% month-over-month. This far exceeded expectations. The jump is retail sales is a wild cry from those who have been sequestered for too long. It means, “Let me outta here now!!”  Auto sales were way up. Even without that, it was a strong month.  Overall, retail sales were only 6% below a year ago on a national level.

How long the “boomlet” lasts depends on the size and shape of what follows the CARES Act and how much employment continues to rise.

The Conference Board has been tracking the COVID-19 slump in retail and recreation traffic (see chart).  Their conclusion is simple.  “The data in the chart clearly shows that in every country, the initial drop in traffic to shops and entertainment was swift.  However, the rebound toward pre-pandemic levels takes a lot longer, even after restrictions are lifted.  These data are a good reminder that shutting down is easier than opening up.”

Another sector that appears to be recovering rapidly is housing.  While resale activity is off from a year ago, the decline in activity is less than virtually anyone anticipated.  In addition, after slumping in March and April, mortgage applications for single family purchases are now up 20% over a year ago.

At the local level, the issue for housing appears to be a shortage of supply for sale.  In a price range between $100,000 and $350,000 there is at least a one month of supply of homes on the market at the present time.  Between $350,000-$500,000 supply is less than 1.5 months.  These are very low numbers suggesting that many buyers cannot find what they are looking for.

There was also some less than sanguine information as well.  More than 100 million loan accounts in the country are on some type of relief program that allows the borrower to skip payments.  This includes mortgage forbearance, as well as rent, student loan, credit card and auto loan payment deferments.  About 79 million student loans are in a relief program.  7.3 million auto loans are in the same situation.  So are 1.3 million personal loans.  And don’t forget over 5 million mortgage loans in forbearance, millions who are just not paying their rent or are seeking credit card relief. That people are having trouble with this many loans despite the relief provided by the CARES Act is disturbing.  Lenders are likely to be more cautious making loans  going forward as they try to balance credit risk with the FED’s wish to make credit available to those who, under normal circumstances, get credit. In addition, given the rapid rise in cases and the number of cities and states that have again become concerned enough to mandate masks, social distancing and smaller crowds, there are now more headwinds against the recovery.

The CARES Act basically runs out in August.  While there has been much discussion about a follow up program (The HEROES Act), given the current political situation in Washington, a positive outcome cannot be assured quite yet.  It is becoming more and more important to make sure that those who are unemployed receive funds to keep them from digging financial holes that would condemn them to a long recovery for the next few years.   This would make the national recovery as a whole move less rapidly.  At the same time, this new act must do away with the perverse incentives that were contained in the CARES Act. Time is running short.

In Arizona, revisions in the way deaths are calculated have not changed the pattern. The number of deaths is still declining. On the other hand, the number of confirmed cases continues to increase. The increased number of people tested does not explain the entire increase. Our political leaders made the adjustment necessary to get thing back under control without shutting down the economy again.  I believe the moves made were the proper ones.  But, the effects that increase in cases and the requiring of masks, etc. will have on individual desires to go out to restaurants, bars, retail stores, travel and so on remains to be seen.  Certainly, it will not speed things up.

The good news is that this is temporary.  Economic development activity continues to be brisk.  And the employment numbers suggest that the state will continue to do well compared to the U.S. as a whole.   This is a work in progress.  It is difficult.  And there is still no real solution (vaccine or something that mitigates the effects of COVID-19) in sight.  At least states are making some adjustments that hopefully will cool the rapid run up of bad information.

One other good piece of information.  Arizona on a year-to-date basis is the second most rapidly growing (actually declining less than all but Utah) and Greater Phoenix on a year to date basis is doing better than any other major metro area in the country through May.  This bodes well as the economy continues to recover.

The other data we will go over today is the same type of good, bad, and ugly we described a couple of weeks ago.  The good (or at least better than expected).  The employment numbers, the unemployment rate, housing, retail sales and interest rates.  The bad.  Initial claims for unemployment insurance, leading indicators, and industrial production.  The ugly.  Everything is relative.  What would have been considered ugly pre-COVID-19 is now considered good or bad. 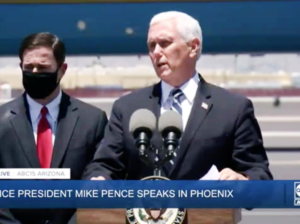