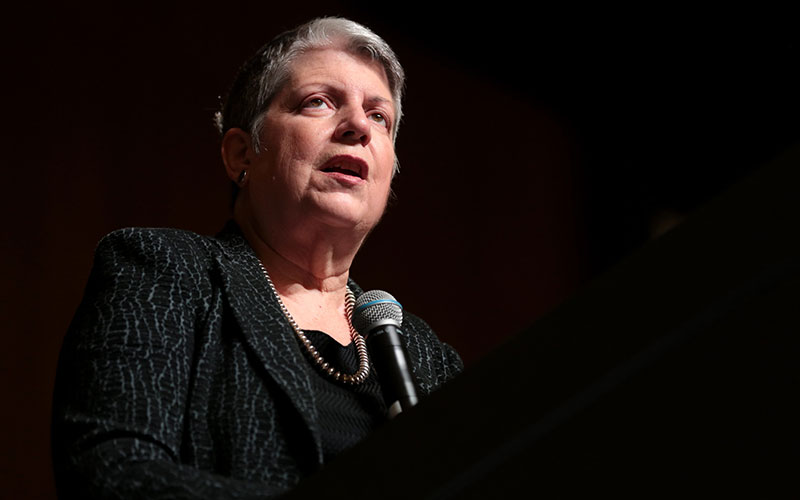 University of California President Janet Napolitano, shown in a file photo, announced the divestment in May. Her statement praised UC’s sustainability efforts, including the university’s goal to be carbon-neutral in five years. /Photo by Gage Skidmore/Flickr

Student activism has shaped history in powerful ways, and college students have gained traction recently on a long-standing front: divestment of endowment and pension funds from the fossil fuel industry.

The University of California system last month completed a $1 billion divestment from oil, gas and coal, instead putting the money in clean energy – becoming the largest school system in the nation to do so. The university, which represents UC Berkeley, UCLA and seven other campuses, announced May 19 that $1.03 billion of its $126 billion in assets has been dedicated to “promising clean energy projects,” including $750 million for solar and wind developers.

The divestment push is an international effort by climate activists to condemn the billions of dollars in capital flowing into the fossil fuel industry, and more than 1,200 institutions are on board.

But it has been slow to catch on at many universities, including Harvard and Yale – as well as Arizona’s three state universities.

With 285,000 students and a $13.4 billion endowment, UC is the largest American university to completely divest from fossil fuels, and it aligns with the school’s goal of carbon neutrality by 2025. The landmark move was driven by UC’s policy to weigh environmental, social and governance issues and align investment decisions with the school’s sustainability efforts, according to the May 19 statement.

“The University of California uses more green power than any other university in the nation, and we are also the leader in the amount of renewable electricity we generate on our campuses,” the former Arizona governor said in the statement. “Sustainable climate solutions and sustainable investing are more important than ever.”

Collegiate divestment campaigns over the past few decades have targeted the tobacco industry, but America has a rich history of student activism that has reshaped life in many ways, from the civil-rights movements to protests against the Vietnam War to, in recent weeks, demanding an end to police brutality against people of color.

Climate change activists hope to capitalize on the “leading-edge advocacy” of college students, said Richard Brooks, a campaign coordinator for 350.org, a U.S. nonprofit dedicated to the divestment movement.

“They don’t want to see their university – where they’re going and putting money into – is invested in something that is counter to their future,” Brooks said.

In Arizona, the divestment movement drew headlines in 2016 when Northern Arizona University students protested fossil fuel investment for several days, resulting in the arrest of several students during a sit-in demonstration.

A few months later, Arizona State University business professor Hendrik Bessembinder published research suggesting that such divestments could reduce the value of large university endowments by billions of dollars. The frictional costs of selling assets, which often are tangled in relatively illiquid funds, can be costly to universities, he said.

In addition, Bessembinder said, the sale of existing assets doesn’t take money away from fossil fuel companies, only transfers ownership of the investment.

“A central but often overlooked point is that divestment is a symbolic action that does not directly affect the companies whose shares are sold, yet, it has real costs that are borne by divesting institutions and their stakeholders, which in the case of universities means faculty, staff, and students,” he said. “Of course, a symbolic action can have indirect benefits, even if they are hard to assess.”

His research seemed to resonate among students at Arizona universities, where fossil fuel divestment is not high on the agenda of activists.

However, ASU has partially divested from the fossil fuel industry, motivated by the university’s own environmental, social and governance committee.

ASU’s $922 million endowment does not include holdings in coal mining and will divest from tar-sands mining within the next year, according to Jeff Mindlin, chief investment officer with the ASU Foundation.

Brooks of 350.org argues that the mere stigmatization of fossil fuel industries is an accomplishment for the movement.

“To financially impact the companies, per se – that’s never been the goal of the movement,” he said. “The goals are really about raising awareness around climate issues, fossil fuel companies and slowing down global warming. And really to begin to advance the conversation around the financing of these companies.”

For Richard Sherman, chair of the University of California Board of Regents’ Investments Committee, the university’s divestment underscores a “hopeful view of the future.”

“As long-term investors, we believe the university and its stakeholders are much better served by investing in promising opportunities in the alternative energy field rather than gambling on oil and gas,” he said in a statement.

Although some in the UC community applaud the decision, others aren’t impressed. The Green New Deal at UC San Diego is a movement comprised of students, alumni and faculty who want to see more transparency and a promise from their university.

“This divestment announcement was a financial move, which is great for other universities who are considering divestment,” said graduate student Monica Nelson, a founding member. “Often, financial officers are more motivated by a financial argument than an ethical argument.

“But what we’re concerned about is that there was no commitment made never to reinvest.”

The group also is calling for UC San Diego to conduct an independent audit, including a look at the private equities, to analyze the depth of UC’s “fossil free” commitment.

“You can invest in companies where their business model relies on the burning of fossil fuels,” Nelson said. “Some companies have bigger carbon footprints. The fossil fuel industry is just like so tied up in every different facet of life and so many companies contribute to the fossil fuel industry. So I think it’s pretty fair to say that there will still be financial ties there.”

NEXT ARTICLE →
Survey: 79% of Arizona teachers plan to return to classroom despite virus 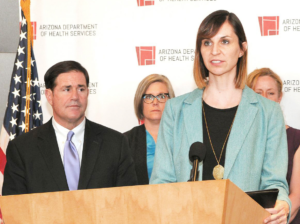