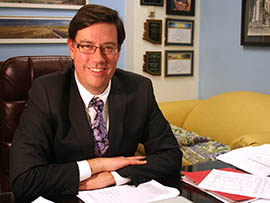 At an emotional Senate committee hearing on Feb. 4, family members of a highway patrol officer struck and killed by a truck driver alleged to have been distracted by his phone pleaded with lawmakers to advance a bill that would prohibit texting while driving.

“We need this law, and I ask you as legislators, please, please keep your people safe,” said Tammy Huffman, sister-in-law of Department of Public Safety officer Timothy Huffman, who died in May 2013 near Yuma.

Huffman and others in the room celebrated when SB 1102, authored by Sen. Steve Farley, a Democrat from Tucson, passed the committee by unanimous vote.

Two weeks later, however, the bill was dead because it wasn’t taken up by committees on Transportation and Public Safety, Military and Technology on a track assigned by Senate President Andy Biggs, R-Gilbert, who has said he doesn’t consider a law against texting while driving necessary. The deadline for bills to get through committees in their originating chambers was Friday, Feb. 20. 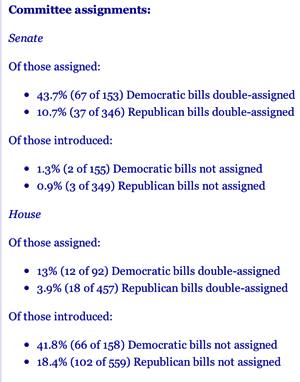 them to become law. The practice is sometimes referred to as double-assignment, though in Farley’s and other cases it can involve more than two committees.

“I wish that wasn’t the case, and you may hear from the other side that it’s not because of our party, it’s because of what the bills are,” Farley said. “It’s hard to deny the numbers in what happens.”

The most common track for a bill is review by one standing committee and then, if it wins approval there, by a chamber’s Rules Committee, which determines whether it is constitutional and in proper form. Bills involving money also are reviewed by the Appropriations Committee.

The review looked at how many committees a bill was assigned to before Rules or Appropriations.

Biggs assigned 44 percent of Democratic bills to two or more committees not including Rules or Appropriations versus 11 percent for Republican bills.

In the House, Speaker David Gowan, R-Sierra Vista, didn’t assign 42 percent of Democratic bills for any committee consideration versus 18 percent for Republican bills. Among Democratic bills that were assigned, 13 percent were assigned to two committees not including Rules or Appropriations versus 4 percent for Republican bills.

In interviews, Farley and several other Democratic lawmakers said the tactics hijack the legislative process.

“Ultimately there are a lot of things you can do in the system in order to gum up bills, but I would like to see bills live or die on their own accord and be argued on the merits,” Farley said.

Nine of the 18 bills Farley authored were assigned to two or more committees.

Quezada pointed to four bills he introduced regarding campaign finance disclosures that were assigned to two committees. None of those bills was taken up by even one of the committees.

Biggs said he has assigned bills this session based on their content and that no political motivation is involved. He said his goal is making sure bills are properly vetted before they hit the floor.

“Because I can tell you, if I want to kill a Democrat bill, I can just hold it,” he said.

One of the Senate Republicans who saw legislation assigned to two or more committees was Jeff Dial of Chandler, with six of his 32 bills getting that track.

Those bills included SB 1068, in which Dial sought to expand full-day kindergarten. It was assigned to the committees on Education, Government and Judiciary before going to Appropriations and Rules. The bill wasn’t heard by any of them.

Dial acknowledged that this made it more difficult to win passage for SB 1068, but he said that he doesn’t think the assignments were done to kill it.

“Ideally it’s going to be one or two committees, but sometimes you get a couple extra assignments, but that actually can be valuable because it gives you the opportunity to go talk to more people,” he said.

Rep. Juan Mendez, D-Tempe, saw 26 of the 36 bills he authored not assigned to committee. He said that even the ones that were assigned received their assignments late in the session with little time for committee chairs to be briefed on them.

“It makes it almost impossible to get anything realistically done,” he said.

Stephanie Grisham, Gowan’s spokeswoman, said in an email that bills are assigned to committees based on their content.

“There are times when multiple committees may need to have discussion and debates on the same bill but for different aspects of the bill,” she said.

Grisham’s email also said that Gowan decided which bills to assign based on whether they are aligned with the Republican Party’s agenda.

Farley, who tried unsuccessfully this week to revive his texting-while-driving bill through a floor amendment, said assigning bills to multiple committees or not assigning them at all is unfair to lawmakers from districts with Democratic majorities.

“I wish there was more recognition of the importance of hearing the voices of the party not in power because all of us have received the majority of votes in our district,” he said. “And I think Republican or Democrat, all of us have legitimate voices and we are representing people who voted for us and people who didn’t vote for us, and we should have our voices heard in the form of having our bills heard.”