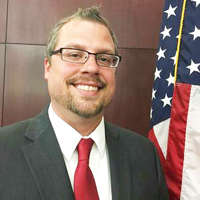 As Kent Volkmer sat in a local sports bar election night, mid-bite of his sandwich, he checked his phone.

He was leading in the primary election race against County Attorney Lando Voyles.

The 25 to 30 people in his party “went crazy,” and, like many people nowadays, they all had trouble resisting checking their phones for the rest of the night.