The state’s biggest electric company will mostly support a plan from state utility regulators to significantly boost the requirement for renewable energy. 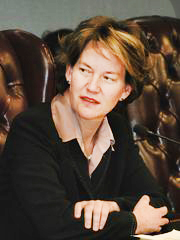 Former Arizona Corporation Commissioner Kristin Mayes said said she was voluntarily campaigning for a renewable-energy ballot measure because she believes it is necessary. /Photo- Howie Fischer

Arizona Public Service Co.’s support for the plan comes as the utility actively campaigns against a similar renewable-energy measure whose backers are gathering signatures to get on the November ballot.

Both plans would dramatically increase the amount of renewable energy used in Arizona.

But there’s at least one big difference: The plan from Corporation Commissioner Andy Tobin would keep the Palo Verde Nuclear Generating Station west of Phoenix in operation. The ballot measure would threaten the plant with closure, APS officials contend.

Some experts see a bigger reason for having the ballot measure. They say APS and the commission can’t be trusted to deploy as much renewable energy as consumers want.

NEXT ARTICLE →
What would happen if Arizona required solar power for all new homes?