Trio seeks to boot Kirkpatrick from the CD2 ballot, says she doesn’t live in 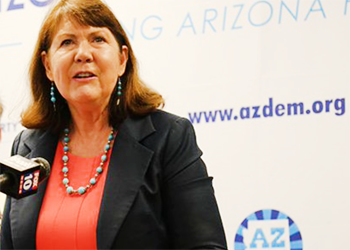 A new lawsuit seeks to disqualify Ann Kirkpatrick from running for Congress from Southern Arizona, charging that she improperly — and illegally — mislead people who signed her nominating petition./Arizona Capitol Times

Three Tucson voters are asking a Maricopa County judge to weigh in on whether former Congresswoman Ann Kirkpatrick actually lives in the Old Pueblo.

A legal challenge filed Monday morning doubles down on complaints from local Democrats that Kirkpatrick is a political opportunist who moved to Tucson last year to challenge a politically vulnerable Rep. Martha McSally.

The 13-page filing seeks to kick Kirkpatrick off of the ballot for Congressional District 2, arguing that she lied on her nominating petitions by listing two Tucson addresses when in the fact she doesn’t live in Southern Arizona.

The claim offers a detailed narrative backed up with a paper trail that shows Kirkpatrick and her husband, Roger Curley, actually live in Phoenix near the law offices where Curley works.

NEXT ARTICLE →
Net neutrality officially dead — here’s what happens next