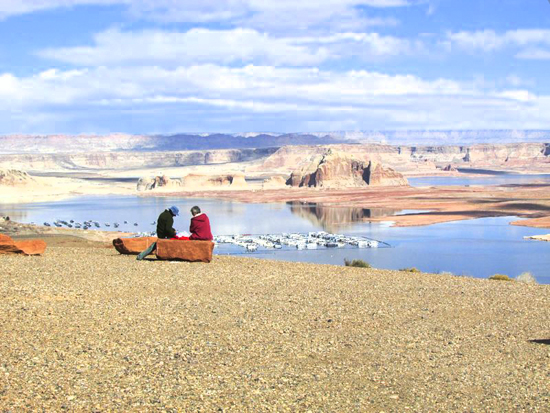 A couple enjoys a quiet February lunch at Wahweap overlook at Lake Powell, where there are concerns about low water levels. /Tribune File Photo

Since official weather records have been kept, Utah has never experienced a year with as little precipitation as it did in 2018 and only one previous year registered higher average temperatures.

That’s according to the National Oceanic and Atmospheric Administration (NOAA), which compiles climate data and presents it in state-by-state maps that ranks states’ years for temperatures and precipitation dating back to 1895.

For the water year that ended Sept. 30, Utah led the nation in terms of its relative dryness over the past 123 years. When it came to hot weather, the Beehive State trailed only neighbors Colorado, Arizona and New Mexico. The impact can be seen in plunging levels of these states’ reservoirs, disappearing streams and toxic algal blooms. Lake Powell is less than half full, as are many of Utah’s largest reservoirs.

“The desert Southwest getting hotter faster than the global average has to do with the lack of moisture in the desert,” said Brian McInerney, a Salt Lake City-based hydrologist with the National Weather Service. “You can assimilate this to someone who is exercising. If they drank enough water, they are perspiring. Then they quit sweating and go into heat prostration.”

The data released by NOAA’s National Centers for Environmental Information show the Four Corners region is feeling the brunt of climate change, experiencing a double whammy of drought and heat.