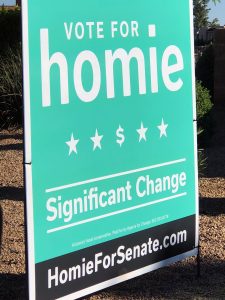 This sign in Phoenix appears to be for a political campaign, but it is really to advertise for a real estate company. In previous election years, a sign like this would have required it to be 51 percent political, but a U.S. Supreme Court ruling took away the requirement. /Photo by Ben Giles/Arizona Capitol Times

Homie won’t be running for the U.S. Senate anymore.

The Utah-based real estate company, which made headlines with a guerilla marketing campaign that took advantage of an election season loophole to post “Vote For Homie” signs on street corners throughout metro Phoenix, has agreed to never duplicate the ad in future election cycles.

Brnovich and Homie CEO John Hanna filed an agreement in Maricopa County Superior Court on Nov. 16 stating that Homie would drop the act.

“Homie shall not advertise itself as a candidate for any office,” the filing states.