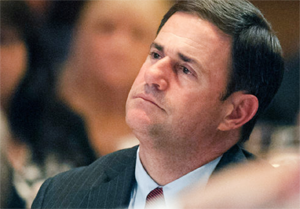 Ending months of speculation, Gov. Doug Ducey said he’s not going to run for the Senate – at least not in 2020.

“I want you to know I’m going to serve the four years of my governorship,” Ducey, who was just re-elected, said in a Monday interview on KTAR.

The whole issue arises because there has to be a vote in two years to fill out the balance of the six-year term of John McCain, who was re-elected in 2016 but died earlier this year.

Ducey appointed former U.S. Sen. Jon Kyl, who has shown no interest in running in 2020 or remaining until 2022.

In fact, Kyl might not even be in Congress that long.

← PREVIOUS ARTICLE
Lost lands? The American wilderness at risk in the Trump era