Scores of families, using commercial DNA testing kits, have learned in recent years that, decades ago, their doctors lied to them. The doctors told infertile couples seeking artificial insemination that they would use sperm from a medical student, from someone who resembled the husband or simply from an anonymous donor. Instead, the doctors used their own sperm — a disturbing and profound violation of medical ethics. It’s called fertility fraud. But is it unlawful?

For now, the unseemly conduct seems to fall into a legal gray area. “Every lawsuit to date by former patients and their children has been unsuccessful,” says Dov Fox, a law professor at the University of San Diego and the author of “Birth Rights and Wrongs: How Medicine and Technology are Remaking Reproduction and the Law.” Last year, for example, a federal judge in Idaho dismissed a claim brought by Kelli Rowlette, who sued Dr. Gerald Mortimer, her biological father, for using his own sperm to inseminate her mother. Rowlette “was never a patient of Dr. Mortimer’s with respect to the alleged misconduct that took place before she was born,” the judge wrote in his decision. So Dr. Mortimer “did not breach any duty of care to Rowlette, because he owed her none.”

“Technology constantly outpaces the law. And, with the advent of direct to consumer genetic testing, people can easily discover through services like 23andMe or Ancestry DNA their genetic connections to other family members. Unfortunately, even though inseminating a patient with a doctor’s sperm in the absence of that patient’s prior knowledge or consent seems like an obvious case of fertility fraud causing harm to the child, most states laws are not structured to provide relief to the child resulting from that harm. Until the laws evolve to match the technology, children who are the product of fertility fraud have limited recourse.” 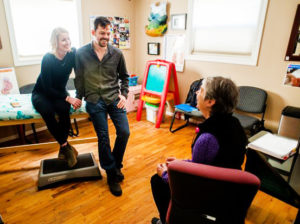