More than a dozen conservation groups, including the Tucson-based Center for Biological Diversity, announced plans Tuesday to sue the Trump administration over its rollback of a federal rule aimed at protecting rivers and streams across the United States.

In Arizona, curbing that rule, Waters of the United States, eliminates protections for more than 90 percent of waterways — 120,000 miles of intermittent and ephemeral streams, wetlands, and other smaller bodies of water that feed larger ones — under the Clean Water Act, signed in 1972 by President Richard Nixon.

In their formal notice of intent to sue, the groups alleged specifically that the Environmental Protection Agency, which issued the new rule along with the U.S. Army Corps of Engineers, is violating the Endangered Species Act.

NEXT ARTICLE →
Ranchers, environmentalists on collision course in defining ‘waterway’ 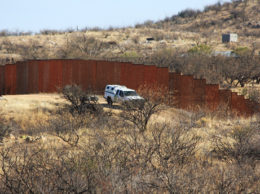