Opinion: A voluntary program could eliminate the million acre-foot overdraft on the Colorado River while still maintaining the dominant role of agriculture./(Editor’s note: Opinion pieces are published for discussion purposes only.

It is no exaggeration to say that a mega-drought not seen in 500 years has descended on the seven Colorado River Basin states: Wyoming, Colorado, Utah, New Mexico, Nevada, Arizona and California. That’s what the science shows, and that’s what the region faces.

Phoenix, Denver, Las Vegas and San Diego have already reduced per capita water use. Yet they continue to consume far more water than the river can supply. The river and its tributaries are still overdrawn by more than a million acre feet annually, an amount in consumption equaled by four cities the size of Los Angeles.

To close the deficit, the U.S. Bureau of Reclamation and the states have been struggling to apportion the drastic cuts necessary. 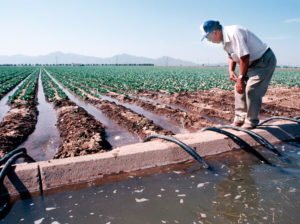