The state House of Representatives has finished its work and notified the Senate of its intent to adjourn sine die today, bringing one of the strangest legislative sessions in recent memory one step closer to its end.

Typically, such a motion, carried out at 5:55 p.m. today, would terminate the session. But the House only adjourned after sending two pieces of late-introduced legislation to a Senate that hasn’t yet indicated whether it would come out of its slumber to consider the final House bills.

The first of those bills, which the House passed on party lines, increases the legal standard under which individuals can sue a business or non-profit if they suspect they contracted COVID-19 on the premises. The second appropriates tens of millions of dollars in CARES Act monies to support childcare centers.

Thursday’s action on the floor concludes a last-ditch effort by the House Majority to restore some normality to the chamber. GOP leadership concocted a plan to hear dozens of Senate bills this week – almost all without amendments, which would allow the Senate to return and transmit the bills to the desk of Gov. Doug Ducey with minimal effort. 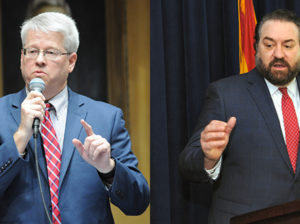