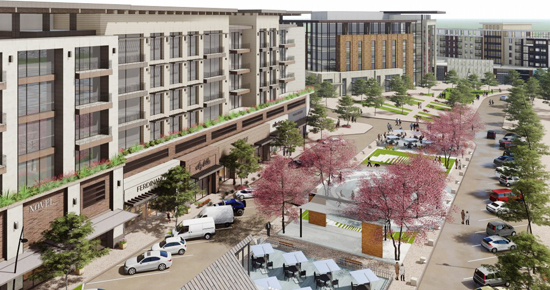 An aerial rendering of Holladay Quarter, a proposed development on the former site of the Cottonwood Mall in Holladay./Rendering by Woodbury Corp.

Holladay residents were left in limbo Friday over whether they will get to vote on a controversial high-density development proposed for the former Cottonwood Mall site.

After a day of legal wrangling in several venues, though, the Utah Supreme Court has agreed to decide the issue, with the justices setting a fast-track schedule in hopes of meeting key ballot deadlines as Election Day this November looms.

Earlier Friday, a 3rd District judge partly rejected attempts by the city and Ivory Homes, Utah’s largest home builder, to derail a citizens referendum petition seeking a Nov. 6 vote that could delay or even shut down the $560 million retail and residential project.

After hearing arguments, Judge Richard McKelvie ruled the city’s contract with developers was legally ineligible to be put to a referendum in November, but he allowed a public vote to proceed on the city’s newly adopted master plan for the site.

By Friday afternoon, city leaders and Ivory Homes had appealed to the Utah Supreme Court. The justices agreed to take the case and speed up their usual tempo to rule by early October, for a final decision before Salt Lake County mails ballots to a majority of voters.

Developers with Utah-based Ivory and Woodbury Corp. have been pushing for more than 18 months for approval to refashion the barren 57-acre former Cottonwood Mall location near 4800 S. Highland Drive into a mixed-use development called Holladay Quarter.

Their plan envisions a massive spread of retail outlets, restaurants and offices combined with a 775-unit high-rise apartment complex and 210 single-family homes, including luxury condominiums, brownstones and manor houses.