The highest peak in the Estrella Mountain Regional Park is at the center of a debate weighing the memory of fallen heroes against ancient traditions.

Rep. Tony Rivero, R-Peoria, is the sponsor of House Bill 2315, which proposes to name it “Charles Keating IV Peak” to honor the sacrifice of U.S. Navy SEAL Charles Keating IV. Keating was 31 when he was killed in a firefight against ISIS in Iraq on May 3, 2016. He is the grandson of Charles Keating, Jr., the Phoenix-based financier who served prison time for his role in the costliest savings and loan failure of the 1980s.

But members and advocates of the Gila River Indian Community have said the honor would come at the expense of traditional indigenous values.

The peak is within ancestral land known by indigenous names. The Akimel O’odham call it “Komatke Do’ag,” and the Pee Posh know it as “Vii Alhá.”

But more to the point, Sen. Jamescita Peshlakai, D-Window Rock, said naming landmarks after the dead is an affront to indigenous people.

NEXT ARTICLE →
Teens say they’re ignored at the Legislature 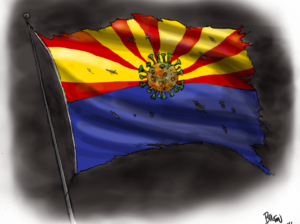