By Ian O’Grady | Arizona Mirror/
Ian O’Grady is a Marshall Scholar from Arizona studying Politics at the University of Oxford.

Voters chose Kyrsten Sinema to be the first woman to represent Arizona in the U.S. Senate. Debbie Lesko won two elections for the House: a special election in April and then again in November.

A Democrat and Republican, these two women have little in common politically – except they both started their political careers running for the legislature with Clean Elections funds.

Lesko and Sinema are part of a trend I observe in my dissertation: more women run for seats in the state legislature, a key entry point into politics, in states with Clean Elections programs.

Past research illustrates how the public campaign funding program present in Arizona, Connecticut, and Maine, democratizes who can run for and win elected office, reducing incumbency advantages and increasing competition and participation. Stanford’s Neil Malhotra concludes, “these programs do not simply fill the coffers of unserious and low-quality candidates, but rather they help serious contestants mount effective challenges.”

NEXT ARTICLE →
[REGIONAL NEWS] ‘He’d like to see peace on Earth’: how a dog became mayor of a California town 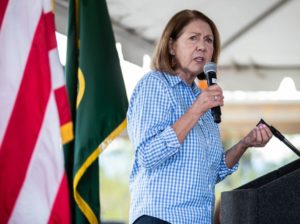