Fences with reporter in Q&A

Bruce Babbitt has nothing else to run for and nothing to lose from speaking his mind. The former Arizona governor and Interior secretary is calling on the state’s youth to organize and push for small and incremental local change to pressure the powerful to act on climate change. Babbitt’s call to action comes after his warning to those attending the Climate 2020 conference in Flagstaff on November 16.

“The Arizona that we know and love is everywhere now at risk,” Babbitt said. “Arizona is becoming ground zero in the effects of global warming.”

What did you mean by your “ground zero” comment?

Well, the municipal rating agencies that rate municipal bonds have finally gotten into looking at their credit ratings of different states as a function of the effects of climate change. It’s really interesting because they have a top tier of states where municipal credit ratings are becoming most potentially affected by climate change and it includes some of the coastal states, some of the East Coast coastal states and, of course, California and Arizona, principally because of the projections about increasing temperatures and drought.

The reports tend to break it down two ways. One is temperatures, with protections that summer maximums in Phoenix may begin to top out at 130, a big ramp up in extreme temperatures. The other one is drought. We already see that in terms of the declining flow the Colorado River and the extended drought in the Colorado River Basin. Again, the projections indicate that trend is going to continue. That comes from groups that are not climate change activists at all – that comes from Wall Street. So, those are three things that I think kind of all relate to each other.

NEXT ARTICLE →
Kennedy: Haul in Pinnacle West board to answer for Brandt’s large consulting contract 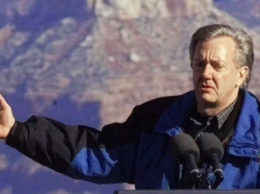 He took down dams, freed wolves and preserved wildlands. Bruce Babbitt is still at work