Sen. Michelle Ugenti-Rita, the Scottsdale Republican who became the face of Arizona’s #MeToo movement when her claims led to a fellow lawmaker’s expulsion, sexually harassed a female lobbyist so severely it took a toll on the woman’s mental health and career, the lobbyist alleged in a sworn deposition.

A year later, as the #MeToo movement took root in statehouses around the country, Ugenti-Rita detailed sexual harassment she encountered as a lawmaker, including suggestive comments about her body and an exposing yank on her dress at a legislative reception. After several other women, including two more lawmakers, joined her in accusing Shooter of a pattern of inappropriate behavior, the House expelled him in February 2018.

Independent investigators hired by the House heard the woman’s story, but did not include most of it in the report that damned Shooter. It became public on Tuesday, nearly two years to the day after his expulsion, when Shooter included her subpoenaed deposition in a defamation suit. 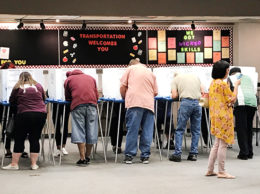